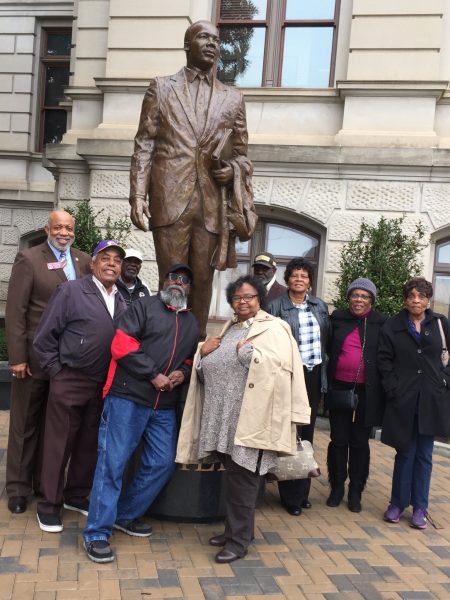 A few months ago, the Georgia General Assembly unveiled its newest memorial on the grounds of the statehouse: an eight-foot tall, bronze-coated statue of Dr. Martin Luther King Jr. Overlooking the very boulevard named after him, Dr. King’s new monument marked the end of a years-long effort to erect the first statue of an African American under the Gold Dome.

The irony was not lost on me during the commemoration that morning as I focused my attention to the stone staircase behind the new sculpture—the same steps we had stood more than three decades earlier in the hopes of establishing a state holiday for Dr. King.

Every January, the King family would lead hundreds of supporters for a march through downtown Atlanta, from the original Ebenezer Baptist Church to the northwest entrance of the capitol building; and every January, they found themselves on the top steps of the stone staircase, met by locked doors and security guards. Even in their own statehouse, Dr. King’s family and supporters were still unwelcome guests.

I joined the march in 1978, a few years after signing with the Falcons. Atlanta opened my eyes to social and civil issues and the power of social change. It also introduced me to Reverend James Orange, a close confidant of Dr. King who continued working in the labor movement as an organizer for the AFL-CIO after King’s death.

No matter the workplace—poultry plants, textile mills, sewing factories, manufacturing plants, shipyards or airports—Reverend Orange carried King’s message of economic justice, emphasizing that King’s dream also required economic justice for workers and equality in the workplace, that workers’ rights are human rights—or, as King said it best: “Our needs are identical with labor’s needs: decent wages, fair working conditions, livable housing, old-age security, health and welfare measures, conditions in which families can grow, have education for their children, and respect in the community.”

It wasn’t long before Reverend Orange invited me to join him, along with Walt Bellamy and Martin Luther King III, to speak at an organizing event for furniture workers in Sumter, South Carolina. Although I was socially aware at this point, I was still far more athlete than activist. I knew little of the furniture workers’ struggle; but as a member of the NFLPA, I knew the value of union representation firsthand.

A dynamic orator with a deep resounding voice, James had the rare ability to overpower any audience. That day in Sumter, he stole the show, bringing the rally to a triumphant close and giving the workers the hope and courage to continue in their campaign to form a union. I watched with admiration as the workers rose from their seats, an awe-inspiring scene as he concluded his rousing speech.

“I am!” James shouted in his strong baritone voice.

“Somebody!” the workers chanted back in unison.

The spark was lit that day in Sumter. I soon found myself riding with Reverend Orange to community events, often with Harold Melvin and the Blue Notes playing as our soundtrack. “Wake up everybody,” James would sing over the car stereo in his booming, baritone voice, “no more sleepin’ in bed … no more backward thinkin’, time for thinkin’ ahead.”

As the youngest member of Dr. King’s inner circle, James had long known the importance of mentorship. After King’s death, he took on the role as mentor to me and many of my teammates for a life beyond football, to make a name for ourselves both on and off the field. The Falcons allowed us name recognition and a platform, while James provided the guidance to make impactful change—the same tools and practices passed down to him from Dr. King.

”Hey Leader,” he would say to us, knowing our potential long before we were worthy of the title. The civil rights movement relies heavily on mentors. Dr. King’s mentorship was crucial to James and his peers, just as James was crucial to me and my peers.

Together, we would all march to the state capitol on King’s birthday, urging state officials to pass legislation honoring our late leader. The last march to the statehouse was in 1983, and it was our biggest to date. Five years after Sumter, I somehow found myself standing next to Coretta Scott King and Reverend Orange, speaking to a crowd from the top of those stone steps. The doors were still locked and state legislators were still adamantly against the idea of the King holiday. Congress stepped in a few months later, passing legislation to create a national holiday beginning in 1986.

Although the holiday and statues are much-deserved, well-received tributes, the best way to honor Dr. King is through activism, mentorship and love—as leaders and advocates of social and economic justice. King Day may be a “holiday” by name, but it is by no means a day off. It is a day on—a day of action. There are no parades, only marches.